IN 1983, A PRIVATE COLLECTOR discovered a fossil near Messel, Germany that turned out to be one of the greatest unearthings in history; for the fossil was going to be later proposed by Dr. J0rn Hurum of Norway and his team of paleontologists as the ‘missing link’ in human evolution. When Hurum got his hands on Ida he wanted to ensure beyond the slightest of doubts that this fossil was indeed the missing link. Together, Hurum and his team analysed and investigated the fossil meticulously in great depth, for two years and concluded that Ida was in fact the missing link that lead mammals to the existence of modern-day humans.

This news changed the world with Ida being announced with unbridled razzmatazz.

However, since then many paleontologists and evolutionists have expressed their doubts on Ida’s relevance to human evolution. It is known that during the time that Ida had lived (around 47 million years ago) there were two distinct primate groups, haplorhines (dry-nosed) and strepsirrhines (wet-nosed). Haplorhines consist of tarsiers, apes and monkeys and now humans, whereas strepsirrhines consists of lemurs and lorises.

In 2010, anthropologist Chris Kirk and his colleagues from the University of Texas published a critique of Ida in the Journal of Human Evolution. Kirk and his colleagues revisited Ida’s tooth, skull, jaw, and other body features and concluded that she was a strepsirrhine. Since Ida’s relevance depended on her being a haplorhine, this lead Kirk and his team to contradict and refute Hurum’s conclusion that Ida is the missing link in human evolution. Hu rum and his team had come up with multiple pieces of evidence as to why Ida was the missing link but Kirk and his team were able to counter-argue most of them and refute Hu rum’s evidence. One of these pieces of evidence Hurum and his team discovered was that Ida had a short snout, deep jaw and opposable thumbs, three anatomical features present in modern day humans. 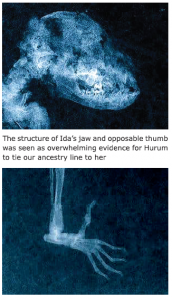 This however was discredited by Kirk’s team who explained that those three features are known to have evolved multiple times among primates, including several times within the lemur/loris lineage. Furthermore, Kirk and his colleagues argued that Ida lacks majority of the key anatomical features that demonstrates a close evolutionary relationship with living haplorhines. An example is a middle ear with two chambers and a plate of bone that shields the eyes from the chewing muscles. These features are present in living haplorhines but seem to be absent in Ida. It is known that there was no conclusive claim from any scientific community that Ida was the missing link, only the team of paleontologists assigned by Dr. Hurum had claimed this based on the two years of their painstaking investigation into Ida’s fossil. In fact, it was asked by the paper’s scientific reviewers that they tone down their original claims that the fossil was on the human evolutionary line. One of those reviewers, Professor John Fleagle at Stony Brook University in New York said that it would be a judgment for the scientific community. “That will be sorted out or at least debated extensively in the coming years once the paper is published,” he said. This indicates that there was no support by any specialist or expert outside the investigative team of paleontologists on whether Ida was related to modern humans. Hence the claims that Dr. Hurum’s team had made are clearly unsupported and blown out of proportion. It was fortunate for Dr. Hurum and his team to gain the support of the general public and renowned celebrities such as David Attenborough, who made a documentary based on Ida and her connection to humans. The excessive hype of the announcement of the fossil definitely played a crucial role in misleading many people into believing that Ida is one of our early common ancestors. Along with the misinterpretation of Ida’s anatomical features, Kirk and his team pointed out that Hurum and his colleagues had made multiple errors. They stated that Ida was an adapiforme primate which belonged to a now-extinct group of lemur-like species.

Although adapiformes had once been contenders for the role of anthropoid ancestors, they are now recognized as strepsirrhine primates and have been for the last twenty years, meaning that there was no way they could be the ancestors of humans. Hurum and his team have thus been accused of disregarding two decades worth of scientific research on adapiformes and rightfully so. So did Hurum and his team get it wrong? The evidence suggests they did, however, despite that opposing arguments were released just within days of Ida’s announcement, majority of the public still believe that Ida is the missing link and that Hurum’s team were never mistaken. Why is this? A 1981 article in the Journal of Evolution explains this; “The field of paleoanthropology naturally excites interest because of our own interest in origins. And, because conclusions of emotional significance to many must be drawn from extremely paltry evidence, it is often difficult to separate the personal from the scientific disputes raging in the field … “.evolutionary(Ref.10) treeida’s is truestill beingplace debatedin the among top scientists, but the general population have had their say without question from the instant Ida was publicised. It is up to us as individuals to question any information we are enlightened of and do our own research to build our own understanding and beliefs.