TRADE: The Pros and Cons

Our world has been interconnected for many centuries, and there are many reasons why. It could be religion, tourism and even similar ideological beliefs. However, one of the most significant is trade. Trade has been around for centuries and it is an integral part of our society. Trade means to distribute goods and services to other places in exchange for other goods and services from those places. This is because people have been exposed to many different materials and ideas that originate from other areas and this gives people a better understanding of that particular place. The system of trade has drastically evolved over the past few centuries. Research has shown that the sum of imports and exports across nations was accounted for 10% of global production in the 19th century and now, it has increased to more than 50%. With these factors in mind, trade has significantly impacted global development, increasing interactions between people and increasing the economic growth of underdeveloped nations. However, there are factors of trade that have a negative impact on the society and it must not be neglected. 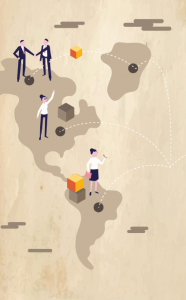 The connections between humans are based around our exposure of different goods and services from other areas. The history of trade is fascinating and it gives a good understanding of how the exposure brought countries together. The earliest form of trade began in the third millennium BCE, when Mesopotamia traded textiles, spices and metals to the Indus Valley in present day Pakistan. This trade allowed for the Indus Valley to be exposed to a different culture, linking these two places together. This trade was so significant that it brought about a road called the Silk Road, linking the Eurasian and African continents with China. These linkings allowed for European nations to be exposed to a new material called Silk, thus the name Silk Roacf.’V’ The material fascinated the Europeans and they wanted it badly. As the silk reached Europe, the clothing industry was changed forever, and this wouldn’t have occurred if it wasn’t for the exposure and trade of silk from China. These are only few examples of the revolutionary events that brought about an evolution in society, and it was all because of trade.

Over the past few centuries, countries have begun to specialise in only one industry instead of many and it has contributed massively to connecting people and countries together. As countries know the main industries of other countries, they will depend on each other for that main ???? service. An example of this can be a trade relationship between Portugal and England. Hypothetically, Portugal may supply wine and England may specialise in wheat. If both nations have a dependence on each other’s respective industry, a relationship between them would evidently form. This is because both countries rely on each other for their respective industry and it is important for both countries to establish a strong bond and relationship in order to maintain the trade alliance. However, if England and Portugal have a bad relationship, trade relations between them would cease and thus both countries lose an important trading partner. Such a significant loss” for nations reinforces the importance of sustaining a mutual relationship between two nations, which in turn, allows for a stronger trade alliance.

From the early beginnings of trade to today, many ideas and concepts have been traded between countries, interconnecting many people and nations around the world. One of the greatest ideas to be traded is the idea of paper as a writing element. Paper originated from China, during the Eastern Han period (25-220 AD) and in the eight century, it spread to the Islamic world, and was brought to Europe in the 11th century. During the 13th century, paper was refurbished in Spain by utilising paper mills with water wheels. This concept had impacted the world as it served as a more sophisticated and better method of preserving knowledge, it was a lighter material than bamboo and a cheaper writing method than silk. However, if trade had not bought paper to Western areas, paper would not have been utilised to its full extent and the knowledge that we hold today would not have been preserved. Another important concept was the Black Death in the 14th century and it spread through Europe from Asia. The plague was caused by flees in brown rats, which travelled via exchanges from the two continents. This epidemic proved to be an aggressive force for the millions of fragile lives lost during that time. It was at this point in time however, that Europeans from around the continent shared solutions on how to defeat the plague. Although it was a difficult task, he plague was eradicated and many people were able to interconnect with each through a common enemy and a discussion of ideas. This could not have been possible without the trade between two areas, China and Europe.

Although the positives of trade have proved to be impacting the world significantly, this doesn’t hide the negatives as well. One of the negative impacts of trade is the economic dependence of countries for goods in other areas. Although it has been stated that economic dependence can have positive effects, this can also be a problem. Developing nations express their dependence through the demand for economic and non-economic factors such as labour costs, convenience and safety. However, this exposes the economic vulnerability of poor countries. For example, if an underdeveloped nation financially depends on a stronger country, then the stronger nation can exploit the economic instability and weakness of such poorer nations to their benefit. This is referred to as land grabs. Another negative impact is the ripple effect a stock market crash has over many countries. This is significant because if the crash affects a strong nation’s economy, the other countries that are reliant on the affected country’s economic power will upset their economy as well. An example of this is the Great Depression in the 1930’s, which upset America’s stock market and also affected the economies of other nations, which triggered a world crisis. These negative impacts are very severe and we must be careful of how reliant we are on the trade industry for sustaining a better economy for every nation.

The impacts of trade have either helped or destroyed the economy of nations, which can affect global development. The positives of trade are that the economic dependence, exposure to new materials and the spreading odeas and concepts have certainly increased human interconnections over the past centuries. However, there is an abundance of negative impacts of trade, notably the economic dependence of countries over others, potentially exposing a weakness in their economy and the ripple effect, upsetting economies of many nations at once. People have appreciated the benefits of trade between nations for many years, as it can maintain an economic growth for a country and can increase interconnections between people and countries. However, as the modern world is evolving, trade must be used appropriately to get the best out of the system, allowing growth and development of global economies.