Eloquence of make-up and costumes 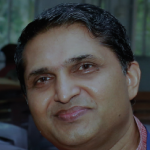 As a child, whenever I thought of Lord Krishna, he appeared in the form of Kathakali make-up and costumes. His shining blue face was bracketed in white Chutti adorned with silver Muti (Krishna’s headgear in Kathakali denoting his tied-up hair) and white and yellow upper clothes, falling over the blue body-cover, above the yellow enhanced waist skirt. I can easily see in my mind’s eye, several Krishna actors: Kalamandalam Krishnan Nair, Mankulam Vishnu Namboothiri, Vaikkom Karunakaran and so on, with their dewy-red eyes, quivering cheeks and smiling soft lips. The names have no importance; I only see Krishna in their attire.
Comparatively more realistic Krishna forms that I had seen in paintings or movies have no impact upon my memory. Such is the influence of the highly theatrical Kathakali make-up and costumes upon the mind of a person who knows the art-form. The thick facial make-up in Kathakali, enhances the power of facial expressions. The heavy costumes clearly showcase the patterns drawn in the air by body movements of the actor.
I still clearly remember my first Kathakali performance as a 10 year old, in full make-up and costumes in the auspicious night of Sivaratri in 1978 at Ettumanoor Siva Temple. I played the role of Lavan in Lavanasuravadham. It took more than a year for my Asan (Guru) to get me ready for that performance.

Every day from four in the morning till seven in the evening, except for school hours during weekdays, the late Kalanilayam Mohankumar Asan trained us relentlessly with stretching exercises, circular movements, eye exercises, practicing hand-gestures sitting on the floor, body massages, dancing and performance collaborating with the musical instruments. I could hold my body straight as Asan wanted; I could bend my lower spine backward properly as it is a must in classical performances; I could keep my eyes open for more than 20 minutes without blinking; I could do all the 24 basic hand gestures fluently without mistake. This was the part of the first level training, or Abhyaasam when an actor learns to hold his limbs exactly as prescribed in Kathakali and to become capable of doing Naatyadharmi (extra-daily style of) acting.

The second level of training, Cholliyattam, calls for mastering the skill of collaborating with the singers and percussionists, to blend with the music of Chenda and Maddalam, to handle choreographies of Kathakali scenes with musical support, but without full make up and costumes. Through Abhyaasam and Cholliyaattam, the student makes his body transparent. Whatever is there in his imagination should be seen or expressed through his body movements.

Only when the student is expert in Abhyaasam and Cholliyaattam, is he allowed to perform in full make-up and costumes, which is the third level in training. The student now has his face covered with thick colours and cement-like rice paste. He is dressed up with endless clothes and wooden ornaments. He might not be able to single-handedly lift the suitcase in which all these costumes and dress items are packed; but he wears them on his body and has to perform for hours! It is a wonder, indeed, but the result of constant practice.
During my first performance in full make-up and costumes, I found it difficult to even move my legs. Asan did the painting on my face. He applied the prepared seeds to my eyes to redden them. He placed the Muti on my head. I offered Dakshina of coins and vettila-paakku to all the elders, denoting my reverence and thankfulness for allowing me to enter into their territory. I thought of it as the inauguration of an unending pilgrimage. After that first occasion, I began to draw the lines by myself on my face before performance. I learned how to fix Muti by myself on my head. But it has been a long journey of trials and errors. Each day, one keeps learning new lessons. 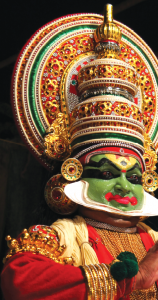 I am conscious about the challenge of transforming my make-up and costumes for effective and effortless communication on stage. My mind tries to exchange thoughts with the audience during each performance. My hands try to convey ideas through Mudras, my posters try to present moods of the character and my eyes are trying to express the details of the deep feelings of the character; my face, hands and body are covered up with colours and costume cloths. How can I make my body movements visible and effective through the thickness of the costumes? Am I able to bring my costumes under control, so that the subtle waves in my body and limbs are powerfully communicated? This is the test I face, even now, in full costume performances.
Considering Abhyaasam, Cholliyaattam and full costume presentation are three levels or layers in Kathakli performance, there is a fourth one: eloquence of make-up and costumes.
For the viewers conversant with the magnificent presentational style of Kathakali, effective communication through costumes may not be a challenge. They have enough exposure with the Kathakali style of presentation, to overcome the challenges in it. Within five minutes of the commencement of the performance, they stop looking at the super human figures and instead, start interacting with the waves of the aesthetic world created by my movements and the music. The presence of the costumes on my body never hinders their aesthetic experience, because they already know to look through the costumes.

This, however, is not the case with a new spectator. His attention can be distracted by the infinite details of the ornaments on the body of the actor. There are endless things of interest which can engage his mind during the performance. For example, the colour combination in the make-up and costumes, the strange oscillations of costume materials, the interaction between the singers as well as between the drummers, etc. He is usually lost in the jungle of varieties of audio-visuals on the Kathakali stage.
A viewer needs guidance to appreciate Kathakali. He must know what to look for and even where not to look at, during any performance. When he starts watching it properly he begins to recognise the languages of various traditional codes distributed in the structure of Kathakali. Hand-gestures, dances facial movements and such elements in Kathakali are codified expressions. When the viewer is able to decode them he would be able to accomplish the joy of aesthetic appreciation.
Experiencing this joy is the only purpose of the performance and its appreciation. There is no logical explanation, but it is a fact that I can feel it when my viewers experience such divine happiness. An actor should live for it!