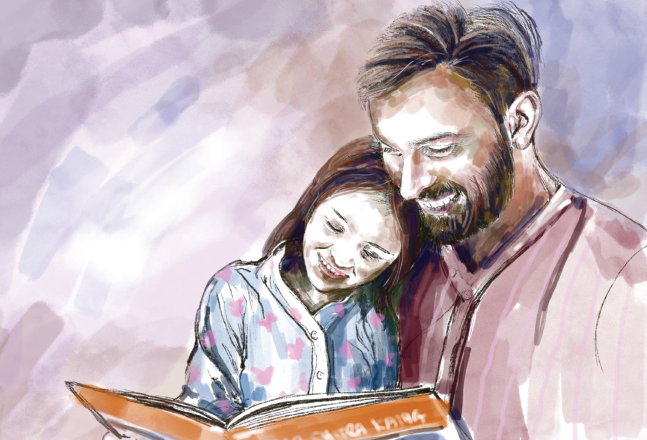 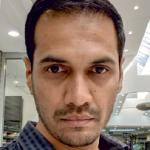 I have slept with Poothana. Many nights. Just like every adult man today who has heard her stories at bedtime.

My Ammoomma introduced her to me. By day, Kozhikkode did not have too much going on at that time for a six-year-old – school, friends, cricket with thengu madal as a bat, fresh lime soda, falooda, and an occasional masala dosa with Amma at Alakapuri. By night, it was showtime – Ammoomma conjured magic. I can smell it now – magic laced with the fragrance of chandanam and bhasmam from her forehead. All Ammoommas have a story-telling voice at the bedside – slow, calm, deliberate, thoughtful, and one-note deeper compared to their normal voice. Colorful characters trooped around with superpowers, in vehicles they chose, with animals and birds they befriended. Battles were fought, heads rolled. My Ammoomma was the master storyteller. J K Rowling was probably still in her chaddies. Poothana was only one of the characters. But she left a mark. I slept well after all this.
A few years later, I saw Poothana – in flesh and bones. Pai and Company, a popular bookstore and the publishing house of the Poompaatta magazine were not far from Alakapuri. Poothana figured in an Amar Chitra Katha edition. This Poothana was blue, big, hairy, not orthodontically treated, and larger than life in a very disturbing way. Despicably evil too. I realised that Ammoomma had tempered the story a lot for me. She had skirted around the gory details. No wonder, I slept well.

Years later. Roles had changed. I was now a father. A father to a compulsive, wide-eyed story listener. The night after night, she would snuggle up next to me, her head on my right shoulder, and say, “Acha, Katha”. I had no option but to dig deep. (You have probably told me every story there is, she tells me today). But, the world was a bigger place now. I had traveled around a few countries. I had known political correctness. Poothana came up in the process of digging deep.

“Really? Tell my daughter about an assassin? A female assassin? How is that for role modelling? It would scar her for life! How could I associate murder with the tender act of a mother feeding a child?” My mind was on overdrive. I calmed myself.
Beyond the veneer of the Amar Chitra version, there was the softer version that my Ammoomma had told me – there were no poison laced breasts in that version, though the intent to kill was there. “Unnikrishna knew everything. He knew that all babies had to be protected. So he took care of Poothana in the processing of suckling”, is all that Ammoomma told me. My version to my daughter was softer. I did not want NDTV reporting – “Malayali father tells bedtime story about child-abusing female assassin to daughter”.

My version went like this. Unnikrishna’s uncle, who was an evil man, did not like Krishna. “Why Acha?” Because when Kamsa went to visit Unnikrishna when he was a baby, Unnikrishna did sussu on Kamsa’s lap and defeated him in arm-wrestling on the same day. So, Kamsa wanted to teach Unnikrishna a lesson so Kamsa sent Poothana. Poothana was to pretend to feed Krishna, but give Him broccoli juice instead (my daughter’s least favorite edible thing then). My daughter empathized with Kamsa’s choice). Krishna got so upset that He gave one strong kick to Poothana who fell off the bed and ran away.

Now that she reads The Game of Thrones, I think I will retell the story to her with all factual details.

I did not have to wait long. Early in October, Mohanettan sent me a beautifully designed poster on Whatsapp – about a Kathakali performance facilitated by Kairali. I wanted to go, not because I loved the art, but that it usually offered unique photography moments. Here was my issue with the art form in the Kerala I grew up, it was usually a Late Night Show. It did not work for me. I needed context, I needed sub-titles, in the form of Ammoomma. The last bus from the temple was at 8 pm, in those days, and the artists would not even have started their make­up backstage at that time. Some tastes are acquired and I never had the opportunity.
“Can I click a few pictures”
“You can, from the sides, no flash (minimum interference)”, replied Mohanettan.
“Can I go backstage, before the show”
“Have to check with the artiste”, said Mohanettan.
Fair point.
On the day of the event, as the audience trickled in, I grouped them largely into four:

1) genuine lovers of the art, those who left the country so long ago that an event like this was reliving childhood, triggers to cherished moments tucked away somewhere and forgotten. You could speak art, drama, music, and literature to them for hours. This group was the majority.

2) the ones who were happy to tag along with their partners – let Kathakali not be a reason for an argument at home later on.

3)the ones who were curious about the show; and

4) the ones who only read the line “food is included” in the poster and were super curious. Kairali always whipped up great meals.

The great thing about any artist is to make the art relevant. I must say that Dr Haripriya (Priya) Nambudiri has an excellent prelude to the show. It is easy for artists to assume that the audience knows about the art form and leave them disconnected. Priya gave a taste of what is to come, just enough to whet the appetite. The most important line in her introduction was, “particular lines in the background score are repeated till the entire essence of the line is enacted out”.
The performance began.
There she was. Poothana! The not-so­evil woman, as told to the 6-year old boy in Kozhikode, described Ambadi, the village that literally raised Krishna as a baby. She saw beautiful people, happy faces, a healthy GDP, and an egalitarian society. She described picture­-perfect landscapes. Some lines were repeated enough for the entire scene to be acted out. Sweetening the scene with every repetition – just like a slow simmer of milk to make a good paalada payasam.

And, there she was. Poothana again! The woman with the wicked intent to harm someone; like in my version to my daughter. She sat around and socialized with the other women mesmerized by a beautiful baby boy who had the complexion of fresh, thick rain clouds, the strength of a Ninja Warrior, and the potential to kill. As much as she wanted to harm the child, she was attracted to him. The palms that extended for a hug, twitched in confusion.
And then.
The background score stopped. It was only the percussions now. Poothana was one on one with the baby. I wondered which version of the story was unfolding. The politically correct, the soft or the gory. Even the baby who was wailing among the audience had started paying attention. There was tension in the air. The lamp at the stage flickered ominously. A few people in the audience cleared their throats. A lady by my side tugged on her own saree. The percussion had reached a crescendo.
And, there she was. Poothana again! The hair on my arms stood up. She was going for the kill. The tussle with the baby had unleashed pain and anger. In a moment, the facade vanished and the Poothana in my Amar Chitra Katha came alive. Evil, loud and shrieking. I did not need sub-titles now. I just clicked pictures in my frenzy. Some things are best stored in memory, the others in a Google Drive.
This is the beauty of a strong artist. Priya, at will, within seconds, had transformed herself. She had invoked and unleashed the killer and unleashed into the audience with such power.

Usually, I finish a Friday with a drink. I did not need one tonight. I was intoxicated with delight. I had walked with Poothana again. I had traveled many years with her over this show. It is said that music takes you to the place where I first heard it. In a strange way, Poothana gave me fond memories. Somewhere from the stars above, my Ammoomma winked, her bhasmakkuri intact.

Tonight, I am sleeping with Poothana. Again.

For those of you who missed the event, this story may have been incoherent. Here is some additional context. The performance center probably fit five hundred people, was built like a close-knit amphitheater with elevated seating. The stage had pitch-black back-drops and side­drops. The light just focused on the artist and moved around with her. A lamp flickered at the center of the stage closer to the audience.
The show focused on Poothanamoksham, (Yes, Moksham, not moshcam). Literally meaning the liberation of Poothana from the endless cycle of birth and death. The show was structured in three parts: