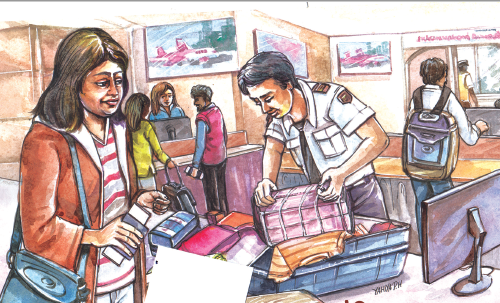 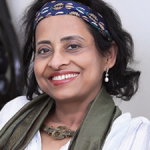 The box lay open and the immigration officer pulled out a bag from which wafted the smell of spices- tiny plastic bags held cardamom pods, cloves, and nutmegs. “Did you know that cloves are not allowed?”- he looked at the embarrassed woman as he tossed it into the bin. Her face fell as she waited for the verdict to come down on the black halwa, the banana chips, and the murukku, lovingly packed by her family back in India. When the chips were unceremoniously dumped, her face fell further. Made from fresh bananas and fried in oil crushed from the coconuts from her land, the officer could not have known that he had just tossed out a bit more of the loving packed into those yellow crunchy discs.
Zippers pulled and the VIP suitcases relocked, the young couple steps out to be greeted by the sunny skies of Perth. As their waiting relatives drive them on the well-laid roads, they look out of the car window in wonder. Not a pot-hole insight. No rubbish litter the sides. And where are all the people? They silently take in the sights – neat industrial buildings from which the souls seem to have been sucked out, petrol stations with car washes, hamburger joints encased in glass- houses … Why did the trees look so grey as they stand watching the sparsely occupied cars go by?
They are ready to start a new life and call Australia home. The immersion is quick though not painless. Their professional qualifications find them jobs almost always a step down. A price they reluctantly pay for having moved countries. Migration, a story of mankind starting with the mitochondrial Eve. Some looking for a safer haven, some for greener pastures and others driven by curiosity and a sense of adventure. Whatever the reason, the new comers almost always enrich the soils they touch.
The Indian diaspora is a vibrant one bringing with them the tangible and the elusive flavours of their land . Well educated and multilingual they filter into jobs. Accents are mocked, hard work is appreciated though not always rewarded. Sometimes alienated, sometimes rewarded, sometimes included, sometimes set apart, they return to their homes and families every evening to replenish their bodies and spirits.
Before too long the young couple welcome into their nest the first generation of Indian Australians. They imbue their children with the formula they have worked out for success. A sound education. The parents work hard by day, drive their children to attend dance classes, music and sports on weekends, shepherd them to temples and churches, cook them flavoursome food and tell them stories about their homeland.

Giving the children roots, they struggle to lend them wings. But the fledglings soar. They grow in confidence and embrace opportunities with abandon. No accents hold them back and no openings are denied. The safety net of their parents and their carefully garnered bank balance offer chances the immigrant parents have not enjoyed.
So, the lucky generation finds their Australian dream as their parents watch with pride. The parents smile, knowing they have seeded and fertilised this harsh soil with a unique brand of Australianness- a more hospitable terrain where equity can be commanded and talent can flourish.