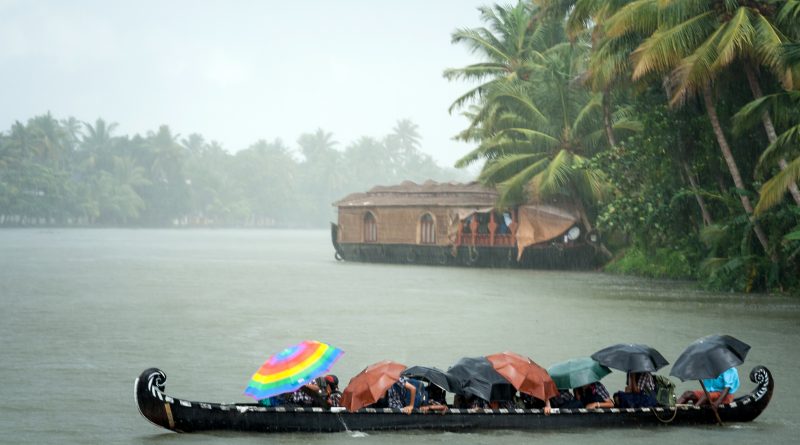 The calendrical reliability of the Indian monsoon has changed over the past few years, impacting agriculture and in turn, the economy.

While the awareness of the issue is reflected in national level policy, to develop effective policy plans it is necessary to have models that project scenarios at smaller scales – at state, district and location levels, writes S. Gopikrishna Warrier in this commentary.

This story is part of Covering Climate Now, a global collaboration of more than 300 news outlets worldwide to strengthen coverage of climate change.

From the time settled agriculture started on the Indian subcontinent millennia ago, there was a dependence on the calendrical reliability of the rains as they sustained the crops. Every year winds from the southwest pick up moisture from the Indian Ocean, Arabian Sea and the Bay of Bengal and deliver it over the land between June and September. Then, between October and December, the same winds return from the northeast, carrying moisture to the eastern coastline.

This seasonality seems to have got disturbed in the recent years and has become a cause of great concern not only for India but also the other countries of the subcontinent, where 1.8 billion of the world’s population lives. The director­general of the India Meteorological Department had stated to Mongabay-India that the seasonal reliability of the monsoons has been changing in the past few years. What used to be a steady combination of rains and brightness is giving way to long periods of inadequate rainfall followed by intense rain; in short – drought and floods.

For instance in 2019, in the state of Kerala, the southwestern tip of the Indian peninsula, June and July were months of inadequate rains, followed by a burst of intense rains in the early weeks of August, causing floods and landslides in the northern districts. Kodagu and Chikkamaguluru districts of Karnataka, which are in line with Kerala, had the same pattern. Avalanche, a river valley in the Nilgiris mountains in Tamil Nadu, received more than 900 mm of rain in one day.

Mumbai, the maximum city, was flooded or weeks together with bouts of intense rain in quick succession. With increased flow from the eastward flowing rivers originating in the Western Ghats, western districts of Maharashtra such as Satara, Kolhapur and Sangli, faced heavy floods and destruction. Northwards in Gujarat, it was Vadodara and surrounding regions that faced the brunt. In the north and northeast, there were floods in Himachal Pradesh, parts of Uttar Pradesh and Bihar, and Assam were also underwater.

Juxtaposed to all this, the reservoirs supplying drinking water to the southern city of Chennai had run dry this summer. Chennai had devastating floods in December 2015, and since then did not receive sufficient rains in subsequent monsoons. 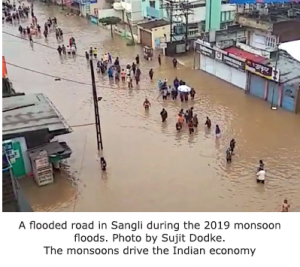 It is not as if there were no extreme weather events (EWEs) during the monsoons previously. In recent years they are becoming more frequent, intense and widespread. When Kerala flooded in August 2018, it led to a domino effect of impacts. The Kerala society was taken by surprise, since the last such event had happened in 1924, nearly a century ago. It was prognosticated then the next such event will come faster than a century later.

Almost similarly intense rains happened in August 2019 – just a year later. Kerala was spared the devastation of 2018 in 2019 because the intense rain did not happen all over the state, and the monsoon was deficient before the EWE.

The erratic monsoons have a serious impact on the Indian economy, especially at this time of an all-round economic slowdown. Even though over the decades the share of agriculture in the national GDP has reduced, the multiplier effect of a bad monsoon cut across all sectors. Currently, the contribution of agriculture to the GDP is only 16 percent but it employs nearly half of the country’s population.

India’s business calendar literally starts with the southwest monsoon, when the festival season starts after the first harvest that these rains bring. Good, helpful rains lead to a good harvest, and it reflects in the joyousness of the festival, be it Diwali or Onam. If it is poor rains or floods, there is an overcast on the festivities, and the spillover continues into the following months.

A good harvest drives domestic consumption, that gives buoyancy to the festivals and impetus to the economy. People buy clothes, white goods, tractors, motorcycles and cars during this period. A bad harvest dulls this impetus, oftentimes leading into a downward economic spiral. 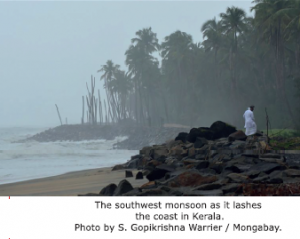 The impact is worse when EWEs cause destruction of public and private property and assets across different parts of the country near­ simultaneously. This adds to the impact of human mortality and morbidity. Farmers, businesses and enterprises find it difficult to recover after the severe economic shock of an EWE.

The Post Disaster Needs Assessment Report of the United Nations and the Government of Kerala had estimated the economic loss for the state after the August 2018 floods as rupees 310 billion (USD 4.4 billion then). If this was not a heavy blow for a small state with a meagre tax base, the repeating floods of 2019 caused more damage, even before the earlier ones were repaired and people rehabilitated.

On agriculture the impact of erratic monsoon is direct. Between 50 to 60 percent of Indian agriculture is still rainfed, without access to any form of irrigation. This makes it vulnerable to any change in monsoonal patterns, for the farmers rely on the date of arrival, predictability of spread and quantum of rainfall for their farming. If it is late their seeds wither away, and if the rains are in excess then the plants drown and dry. By the time the soil dries the rains may end, and thereby exposing the crops to end-of­season drought.

To add to this is the flip side of using seeds of improved crop varieties and hybrids that are tailored to produce maximum yield for a specific rainfall pattern. When the rainfall pattern  changes – as is happening more frequently in recent years – the plants deliver inadequately.

Traumatised over multiple crop failures, farmers and farm labour migrate to other parts of the country to pick up many other jobs or work as construction labour. And, when an EWE strikes their destination, they return doubly­traumatised to where they started from. Some farmers, who opt not to leave their farms even after repeated crop failures and debts, end their lives in frustration.

The first question is whether India is aware of the issue at the national policy level or not. The answer is yes, since the national Economic Survey 2017-18 had a dedicated chapter on the impact of climate change on Indian agriculture. The economic survey is the document that the Union Government prepares and publishes a day before the Union Budget is presented in the parliament, which summarises the economic outlook for the present and the future.

Using IMD data, the survey notes an increase in average annual temperature between 1975 and 2015, and a decrease in average annual rainfall in the same period. The number of dry days (rainfall less than 1 mm in a day) and wet days (rainfall more than 80 mm in a day) has also increased. This means that in the past four decades the country has become hotter, drier, and extreme weather events have become more frequent.

The fact that climate change appeared in the economic survey is a major development from the rhetorical position that India had been taking at the international negotiations. Since 1992, India had been focusing on the common but different responsibilities (CBDR, or equity) provisions of the climate change convention. In short, the argument was that climate change is a process caused by the historical and present-day greenhouse gas emissions of the developed countries, and the ability to emit and grow was the equitable need of a developing country like India.

It was only in 2008 that India initiated the first significant policy initiative on climate change. The Manmohan Singh government constituted the Prime Minister’s Council on Climate Change and the National Plan on Climate Change was unveiled.

Despite India continuing to emphasise the equity issue at the Conference of Parties (CoP) at Paris in December 2015, it communicated to the world an ambitious intended nationally determined contributions to ameliorate climate change. By 2030, India had committed to reduce its emissions intensity of its GDP by 33 to 35 percent of the 2005 value; generate 40 percent of its power requirement from renewable sources; and create an additional carbon sink of 2.5 to 3 billion tonnes of carbon dioxide equivalent through additional forest and tree cover. Since the Paris CoP, India has made good progress on the renewable energy front.

However, with the monsoons becoming erratic, India will need to focus on strengthening the climate resilience of communities living in its villages, towns and cities. To develop effective policy plans it is necessary to have models that project scenarios at smaller scales – at state, district and location levels. The climate change scenarios developed by the Assessment Report 5 of the Intergovernmental Panel on Climate Change (IPCC) only gives a South Asia-level climate change pathway.

The state action plans on climate change (SAPCC) were supposed to develop the scenarios at least up to the state level. But different states have developed SAPCCs of different quality. While Tamil Nadu has been effective in developing a state-level projection till 2100, the neighbouring Kerala’s analysis has been found wanting in such granular data, and its action plan is still a work in progress.

Without micro-level projections, it is difficult to prepare for the mid- and long-term preparedness. In the short term, preparedness plans are always seen to be missing when the disaster strikes. These drills will need to be developed and practised at the local government level.

If India is able to deal with the present-day climate variability effectively, then it will be moving in the right direction to deal with future scenarios. As of now, climate change seems to have come knocking early, and there is no way of predicting with precision what path it will take in the coming decades.